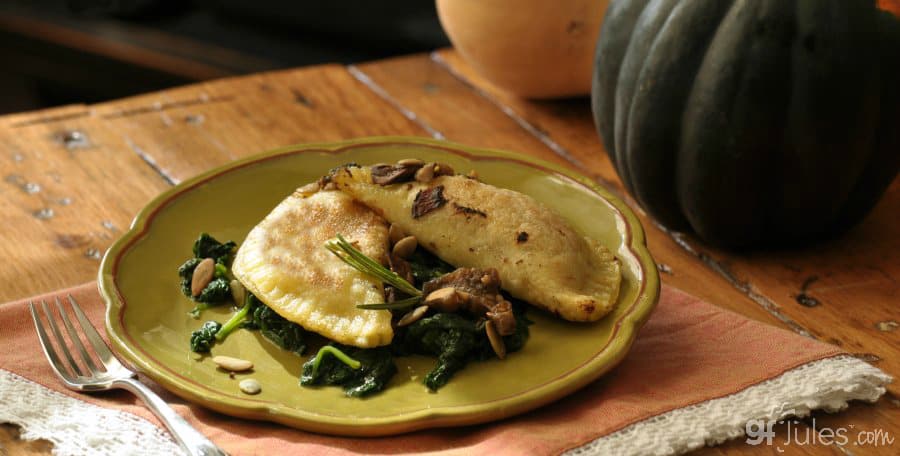 These traditional Polish dumplings (not traditionally gluten free) are boiled then baked or pan fried, and served as a main dish or as an appetizer. I have even filled them with sweet potatoes and sprinkled them with cinnamon and sugar as a sweet after supper treat.

The key here is my gfJules Flour. It adds stretch to all kinds of doughs like pierogi, ravioli, pie crust, pastry and more. And because it’s not made with gritty or funky tasting flours, the fillings really shine in this clean, light pasta recipe. It makes baking and cooking EASY and makes recipes reliable. And now that we have gluten free pierogi in our lives, we can stuff them with anything that inspires us! In Fall of 2009, I was in Pittsburgh giving a lecture at the Center for Digestive Health and Nutrition’s 3rd Annual Conference on Celiac Disease, and teaching gluten free cooking classes. I was repeatedly asked for recipes for gluten free gnocchi and gluten free pierogi. I have already published my amazingly easy recipe for gluten free potato (or sweet potato) gnocchi, so I thought I would tackle the pierogi while it’s still bitter cold outside and we are all craving yummy foods like these to warm us from the inside out!

This recipe is not difficult, but it does involve several steps, so I’ve laid them out below with several in-process photos to help those who are following along on their tablet, phone or pc while making the recipe. I realize this makes it more difficult to print the recipe with all those pictures in it, so if you really want to print it, I recommend copying the entire recipe and pasting it in a word document, then removing the process shots before printing. It will save lots of paper!

If you’d like to view my how-to video, hop over to my blog post to view it!

See this recipe in action in the video below

In a large-bottomed bowl, whisk together the gfJules™ All Purpose Gluten Free Flour and salt. Whisk together with a fork.


Form a well in the center and pour the oil and cracked egg (or substitute) into the well.

Whisk these together without incorporating much flour, until well mixed. Add the sour cream to the well next, whisking to integrate.

Gradually begin stirring the flour in with the wet mixture in the center. Meanwhile, pour 1/8 cup of water on top of the dry ingredients and stir that in as well. As the dough gets too dry, add in the additional 1/8 cup water; add more water as needed to get the dough wet enough to hold together well in a ball. Continue stirring with the fork until all the liquid is completely integrated. The dough should hold together without being overly wet and sticky.


Gather the dough into a ball and wrap tightly with plastic wrap. Set out on the counter for at least 30 minutes while you prepare your fillings like mashed potatoes or sweet potatoes.


Begin rolling the dough by rolling gently in one direction, then in the other, to form a 1/8 inch thick round of dough.

Using at least a 3-inch round cutter (or larger), cut out circles of dough until all the dough is used. One half of the dough should yield about 18 3-inch rounds or 7-8 4 1/2-inch rounds.


Scoop out a marble-size ball of your prepared filling and place it just off the center line of one pastry circle. Press each ball into a longer shape, more like the last knuckle of your index finger, so that the filling will fill the cavity of the crescent formed by folding the dough over itself. Dip your finger in water and lightly dab around the edge of each pastry circle to wet it, helping one side to adhere to the other when folded over the filling.


Fold one side of the pastry over the filling, forming a semi-circle.


Press gently, being sure to seal the edges, then press again lightly with the tines of a fork. Set each formed pierogi aside and cover with a damp towel until ready to boil. Bring a large pot of water to boil and gently submerge each pierogi in the boiling water. Put only as many pierogi into the pot as can boil without crowding (I boiled 6 at a time). Stir once in awhile, if necessary to prevent them from sticking together. Once they begin to float, boil another 5 minutes – total boil time should be approximately 6-7 minutes.


Remove with a skimmer or slotted spoon to rinse and drain. Try not to let the pierogi touch while they are draining, so that they will not stick to one another. Repeat until all pierogi are boiled.


Serve at this point, or pan fry in butter or non-dairy alternative until slightly crisp. Serve alone or atop a bed of wilted spinach with walnuts, craisins, raisins, chopped apples, or any other accompaniments that suit you. Also try serving with my Onion-Mushroom Sauté (as pictured in the banner at the top of this recipe).

Stuff with mashed potatoes and cheese; mashed sweet potatoes; sauerkraut; leftovers … or anything else you love!